The Installation Ceremony for the Interact Club “PAHAL”

The Installation Ceremony for the Interact Club “PAHAL” of the school was held today. The ceremony commenced with lamp lighting and Ganesh Vandana followed by Mahishasur Strotam and the National Anthem. The Principal, Ms. Poonam Kumar Mendiratta in her address, welcomed the prominent Rotarians. She also congratulated the members of the newly elected council. The event was graced by the benign presence of Rotarian Ms. Asha Walia President, Rotary Club of Noida, Ms. Sharmila Grover Secretary Rotary Club Noida and other distinguished Rotarians, Mentors, and Parents. The sworn-in President, Kanishk Kataria shared his vision as the President and showcased all the projects conducted during the past year. The newly elected office bearers were proudly pinned by the distinguished guests present and the school COO Ms. Puja Khurana. Rotary Club President, Rotarian Ms. Asha Walia congratulated the new Council, appreciated the efforts of the team and motivated the new team to remain focused and zealous to achieve their goals. She emphasized the fact that it is an individual that defines a post and urged them to embrace their duties with humility, perseverance and loyalty. The show stealer was the stupendous performance by the yoga students who displayed various formations through Asanas. Love towards God should be unconditional and that was what was showcased by the kathak students in a Sufi song. Last but not the least, the newly elected badge holders danced on a foot-tapping number and energized the atmosphere with their exuberance. The event concluded with the vote of thanks proposed by Samra Shafi, the Interact Club Secretary. 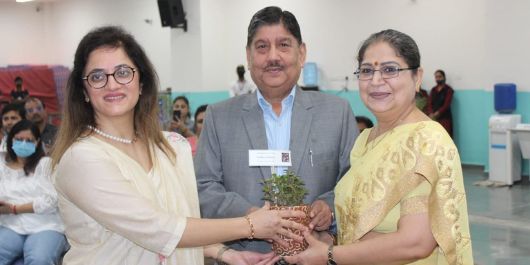 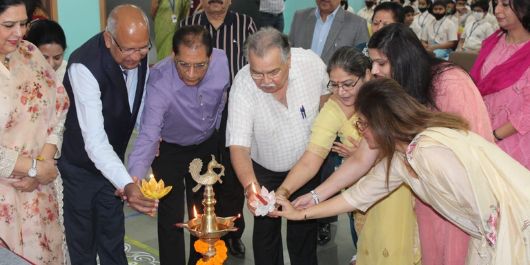