Independence day was celebrated with utmost grandeur to mark the 75th year of freedom from British rule. The School premise was beautifully decorated with tricolour ribbons, balloons and the artistic work of the students.

The students came dressed up in tricolour attire and also as freedom fighters. They presented the role-play of different freedom fighters and paid homage to the heroes of our nation. Special assemblies were conducted wherein the students were seen swaying to the tunes of patriotic songs, performing yoga asanas followed by the National Anthem.

Having learnt the significance of being independent, all the students from Hatchlings to Grade 2 also made beautiful tricolour badges, did colouring and pasting and hand printed the colours of flags putting together a souvenir for themselves. It was a sheer delight watching our children learn, perform and grow into independent and indigenous Indians. 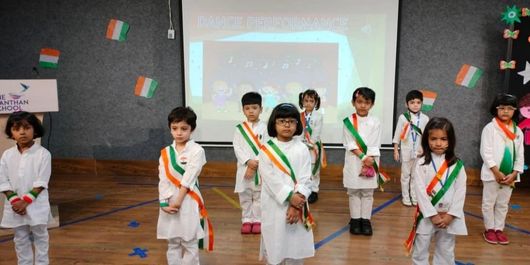